The Library of Congress > Read.gov > Center for the Book > About > Staff

Center for the Book
Staff 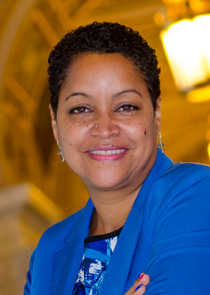 Pam Jackson was appointed Director of the Library of Congress Center for the Book in June 2016. Acting Librarian David Mao announced the appointment by stating, "Pam Jackson’s combined experience in leadership, project management, literacy promotion and fundraising make her an ideal candidate to take the helm of the Center for the Book."

During her 13-year career at the Library of Congress in the Congressional Research Service, Pam Jackson served as a senior-level executive, a manager and a policy analyst in education and public finance. She also has two decades of experience in public education policy and educational institution performance. Since 2006, Jackson has served as a board member—including a term as board president—for Two Rivers Public Charter School in northeast D.C. and has been an integral part of evolving and expanding the school’s performance and growth. Pam Jackson received a B.A. in economics from the University of Pennsylvania and her Master’s degree and Ph.D. in economics from Wayne State University. Her graduate studies and her doctoral dissertation focused on the public-education sector, public-school performance and student achievement.

Before joining the Library of Congress in 2003, she served for 11 years as the CEO of the Coleman A. Young Foundation, a charitable foundation dedicated to the educational development of at-risk youth and college-bound students.

Pam Jackson is only the second person to lead the Center for the Book. With leadership from the Librarian of Congress Daniel J. Boorstin, the center was created by law in 1977 and Library of Congress Historian John Y. Cole became the center’s founding director. In June 2016, Acting Librarian David Mao acknowledged John Y. Cole saying, "This important outreach center has been ably built and led throughout its lifetime by John Y. Cole, and I am confident it will be in capable and enthusiastic hands with Pam."

In 2014, librarian and historian John Y. Cole marked 50 years of U.S government service. As a U.S. Army second lieutenant, he was chief of the library branch of the U.S. Army Intelligence School from 1964 to 1966. Since 1966 he has served the Library of Congress in several important capacities and special assignments.

He is recognized as the leading historian of the Library of Congress, and in 2016 became the first Library of Congress Historian. In a 2011 festschrift published by the Library and the University of Texas Press, The Library of Congress and the Center for the Book: Historical Essays in Honor of John Y. Cole, editor Mary Niles Maack noted that through Cole's several books and more than 100 articles and related publications, one can trace the Library's history from the Continental Congress to the digital age.

Cole is a tireless promoter of books, reading, literacy and of the Library of Congress. He has been instrumental in shaping many significant programs of national significance, particularly the Center for the Book, a catalytic public-private partnership that promotes books, reading and literacy and which includes official affiliates in 50 states and the Virgin Islands. In 2013 the Library of Congress transferred its Poetry and Literature Center, the home of the U.S. Poet Laureate, to the Center for the Book.

Cole has served as a corresponding member and consultant to the Literacy and Reading Section of the International Federation of Library Associations (IFLA) since he was section chair in 1997-2001. He advised the National Library of South Africa about the creation of its Centre for the Book (1998) and the Pushkin Library Foundation in Moscow regarding the establishment of its network of more than 30 Regional Centers for Reading.

To honor Cole's distinguished service to the profession of librarianship, in 2000 the American Library Association presented him with its prestigious Lippincott Award. In 2003, U.S. Poet Laureate Billy Collins dedicated his poem "Voyage" to Cole, an honor instigated by the coordinators of the state centers for the book, a network built by Cole between 1984 and 2002. This surprise gift, which marked his 25th anniversary as Center for the Book director, was published as an illustrated children's book in 2014 by Bunker Hill Publishing.