The Library of Congress > Read.gov > Kids

The Center for the Book in the Library of Congress invites people of all ages to discover the fascinating people, places and events that await you whenever you read. 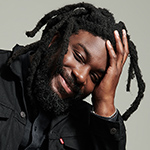 Jason Reynolds, the 2020-21 National Ambassador for Young People’s Literature, is the seventh writer to hold this position, which is co-sponsored by the Library of Congress, the Children’s Book Council and Every Child a Reader, with additional support from Dollar General Literacy Foundation. Reynolds’ platform for his two-year term is “GRAB THE MIC: Tell Your Story.”
Photo by James J. Reddington.
Read more

Read.gov presents a sampling of suggested books that will spark the imagination and transport readers to new and exciting places. Look for these books in your local library. The books supplement the online resources in the American Memory website. Following each list is a link to the corresponding online resources.

Other booklists from the Library of Congress include:

“Dear L. M. Montgomery,
One of the greatest influences from books I've read this year came from your book Anne of Green Gables. Anne's knack for turning ordinary things into extra ordinary things caught my eye. She is clever, fun-loving, creative, determined and occasionally a little bit absentminded. All of these qualities remind me of me and helped me realize that a little bit of romance, or imagination should always be a part of all of us, and can brighten up many an unpleasant day....