The Library of Congress > Read.gov > The Exquisite Corpse Adventure

About the Exquisite Corpse Adventure

Ever heard of an Exquisite Corpse? It's not what you might think. An Exquisite Corpse is an old game in which people write a phrase on a sheet of paper, fold it over to conceal part of it and pass it on to the next player to do the same. The game ends when someone finishes the story, which is then read aloud.

Our "Exquisite Corpse Adventure" works this way: Jon Scieszka, the National Ambassador for Young People's Literature, has written the first episode, which is "pieced together out of so many parts that it is not possible to describe them all here, so go ahead and just start reading!" He has passed it on to a cast of celebrated writers and illustrators, who must eventually bring the story to an end.

Every two weeks, there will be a new episode and a new illustration. The story will conclude a year from now. To get bi-weekly updates with new Exquisite Corpse Adventure chapters, click on the subscribe link

at the top of the page. "This story starts with a train rushing through the night...." No one knows where or how it will end!

Episode 3 – “This chapter is entitled (what else?) THE FOUND CLUE”

Episode 12 – “The Shadowy Abyss of Our Own Fates” 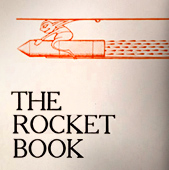 The upward progress of a rocket, lit in the basement by the janitor's son, causes some strange situations as it passes through 20 floors of apartments! Read This Book Now
More about this book